At Budget Auto Centres, we take pride when working on your shocks and struts or the suspension system on your car, truck, van or SUV.  Call your neighbourhood shocks and struts experts today, the guys who know cars.

Whether your vehicle has a suspension system with shock absorbers or a strut-based system, your Budget Auto Centre location has the know-how to diagnose and repair these systems. We install quality Monroe Shocks and Struts.
We can also diagnose alignment problems, and help you get back on track.

Shocks are an important component that serves several purposes, one of which is to keep your tires on the road, and improve braking.

Struts combine the shock absorber and control arm into one unit, common on many front wheel drive vehicles.

Shock absorbers are basically oil pumps. A piston is attached to the end of the piston rod and works against hydraulic fluid in the pressure tube. As the suspension travels up and down, the hydraulic fluid is forced through tiny holes, called orifices, inside the piston. However, these orifices let only a small amount of fluid through the piston. This slows down the piston, which in turn slows down spring and suspension movement.

Struts also perform a second job. Unlike shock absorbers, struts provide structural support for the vehicle suspension, support the spring, and hold the tire in an aligned position. Additionally, they bear much of the side load placed on the vehicle’s suspension. As a result, struts affect riding comfort and handling as well as vehicle control, braking, steering, wheel alignment and wear on other suspension. 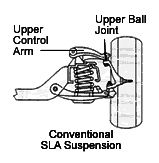 Typically, struts consists of a coil spring to support the vehicle’s weight, a strut housing to provide rigid structural support for the assembly, and a damping unit within the strut housing to control spring and suspension movement. The bottom of the strut body attaches to the steering knuckle, which in turn connects to a lower control arm through a lower ball joint. 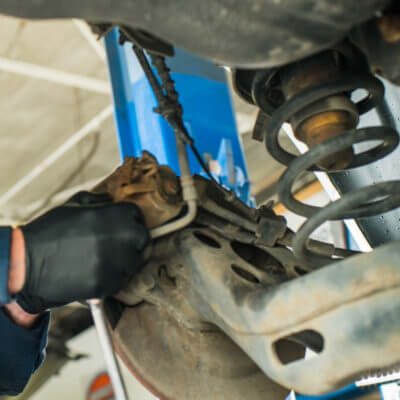 Friendly, helpful and reliable – Budget Brake and Muffler Auto Centres are always there when you need us.

Our technicians not only know the communities we serve, but they also get to know you and your auto repair needs. They earn your trust with exceptional, affordable service the first time, every time.

That’s our promise to you.

Looking for a rewarding career in car care and repair with a progressive employer?

Find The Budget Auto Centre Near You!