50 Years of Excellence In Automotive Repair

CONTEST BROUGHT TO YOU BY BUDGET BRAKE & MUFFLER DISTRIBUTORS LTD. D/B/A BUDGET BRAKE & MUFFLER AUTO CENTRES (“BBMAC”) IN COOPERATION WITH VANCOUVER CANUCKS LIMITED PARTNERSHIP (“VCLP”). NO PURCHASE NECESSARY. CONTEST IS VOID IN WHOLE OR PART WHERE PROHIBITED BY LAW. SEE ELIGIBILITY SECTION BELOW FOR FURTHER DETAILS. TO PARTICIPATE IN THE CONTEST YOU MUST READ AND AGREE TO THESE RULES AND REGULATIONS. PARTICIPATION IN THE CONTEST CONSTITUTES FULL AND UNCONDITIONAL AGREEMENT AND ACCEPTANCE OF THESE RULES AND REGULATIONS (AS THE SAME MAY BE AMENDED BY BBMAC FROM TIME TO TIME IN ITS SOLE DISCRETION). ALL DOLLAR AMOUNTS ARE IN CANADIAN FUNDS ($CDN) UNLESS OTHERWISE NOTED.

In order to be eligible to win a prize, an entrant must be a resident of British Columbia, at least 19 years of age, and must not be (and no member of his/her immediately family shall be) an employee of BBMAC or of VCLP, Vancouver Arena Limited Partnership (“VALP”) or Aquilini Food Services Limited Partnership (“AFSLP”) (VCLP, VALP and AFSLP collectively operating as Canucks Sports & Entertainment, hereinafter “CSE”) or any affiliate of the foregoing. For the purposes of these Rules and Regulations, “immediate family” means husband, wife, spouse, mother, father, brother, sister, son and/or daughter, whether by blood, marriage or adoption and whether or not they reside in the same household.

BBMAC shall have the right at any time to require proof of identity and/or eligibility to participate in the Contest. Failure to provide such proof may result in disqualification. All personal and other information requested by and supplied to BBMAC for the purpose of the Contest must be truthful, complete, accurate and in no way misleading. BBMAC reserves the right to disqualify any entry or entrant in its sole discretion, should any entry or entrant at any stage contain and/or supply untruthful, incomplete, inaccurate or misleading personal details and/or information.

No Purchase Necessary. To enter the Contest, please follow these steps:

There is a limit of one entry per person. Potential winners may be required to provide BBMAC with proof that the potential winner is the authorized account holder of the email address associated with the winning entry.

There will be one (1) prize available to be won, consisting of the following:

3. Visit with a Canucks Ambassador (TBD)3. Round trip limousine service (within the lower mainland) to and from Rogers Arena for the winner and his/her guest, with Star Limousine Services4. Meet Canucks Play by Play Broadcasters John Shorthouse & John Garrett for the winner and his/her guest5. 2 Vancouver Canucks jerseys signed by a Vancouver Canucks player.6. One night stay at JW Marriott Parq Vancouver for winner and guest.
7. $500 Budget Auto Centre Service Gift Card

The approximate retail value of the prize is $1600.

All other costs and expenses associated with the prize, including without limitation transportation to and from the lower mainland, travel insurance if required, accommodations if required, additional meals, additional tickets to the game, additional souvenirs and items of a personal nature, are the responsibility of the winner.

The prize winners will be randomly selected at the end of the Contest Period from all qualified entries. All potential winners will be contacted via phone or email within the first week following their random selection. Odds of winning a prize depend on the number of entrants who participate in the Contest.

A selected entrant will be required to correctly answer, unaided, a time-limited mathematical skill-testing question to be administered by BBMAC and to confirm his/her eligibility.

A selected entrant must also agree to sign and return BBMAC’s standard Declaration and Release Form.

If any selected entrant does not meet all of the Contest conditions, or does not reply within five (5) days of the initial documented contact attempt by BBMAC, that entrant will be disqualified and BBMAC shall be entitled to randomly select a new entrant from amongst the remaining eligible entries.

Once a potential winner is determined, the winning entrant will be directed as to how to claim their prize.

This Contest is void where prohibited by law and is subject to all applicable federal, provincial and municipal laws and regulations. All incidental costs and expenses not specifically referred to herein, including (without limitation) taxes shall be the sole responsibility of the prize winner.

By entering the Contest, entrants agree to release and hold harmless BBMAC, CSE, the National Hockey League and its Member Teams, NHL Enterprises Canada L.P., and the respective governors, subsidiaries, affiliates, agents, directors, officers, employees and representatives of each of the foregoing (collectively, the “Released Parties”) from and against any and all liability, damages or causes of action (however named or described) with respect to or arising out of: (i) entrant’s participation in the Contest, (ii) the receipt or use of the prize awarded therein, or (iii) the administration of the Contest and the distribution of the prize awarded therein.

Prizes must be accepted as awarded and cannot be exchanged for cash or otherwise. Prizes are non-negotiable, non-transferable and non-refundable. No telephone contact or correspondence will be entered into except with a selected entrant.

BBMAC reserves the right to substitute a prize of equal or greater value and/or to terminate, modify or withdraw this Contest, in whole or in part, at any time, without prior notice for any reason, including, but not limited to, viruses, bugs, tampering or other causes beyond BBMAC’s control which affect the administration, security, fairness or proper play of the Contest. In the event a substitute prize is awarded, such prize must be accepted as awarded and cannot be exchanged for cash or otherwise.

BBMAC shall have the right to make all determinations relating to the Contest in its sole discretion. Subject to the foregoing, any controversy or dispute arising out of the conduct of this Contest shall be resolved in the courts of the Province of British Columbia applying the laws of the Province of British Columbia (and federal laws of Canada applicable therein), to which exclusive jurisdiction and law the entrants agree to submit as evidenced by their participation in the Contest.

Use of Contest Information

By entering the Contest, entrants:

● consent to the collection by BBMAC of all Contest information, including their personal information obtained through the Contest, for the purposes of running the Contest, contacting entrants with offers which may be of interest to them (provided they have opted in on the Contest questionnaire) and for such other purposes as described in BBMAC’s privacy policy, which may be viewed at https://budgetbrake.com/company/privacy-policy/

● Authorize the use, by any of the Released Parties, of their names, addresses (city/town only) and, if photographs are taken, their images and likenesses in connection with the Contest or for general promotional purposes, without further compensation or notification.

The Released Parties are not responsible, whether as a result of human error or otherwise, for any failure to contact any potential winners, nor for any incorrect or inaccurate information, whether caused by website users or by any of the equipment or programming associated with or utilized in the Contest or by any technical or human error which may occur in the processing of submissions in the Contest. The Released Parties assume no responsibility for any error, omission, tampering, interruption, deletion, defect, delay in operation or transmission, communications line failure, theft or destruction or authorized access to, or alteration of entries. 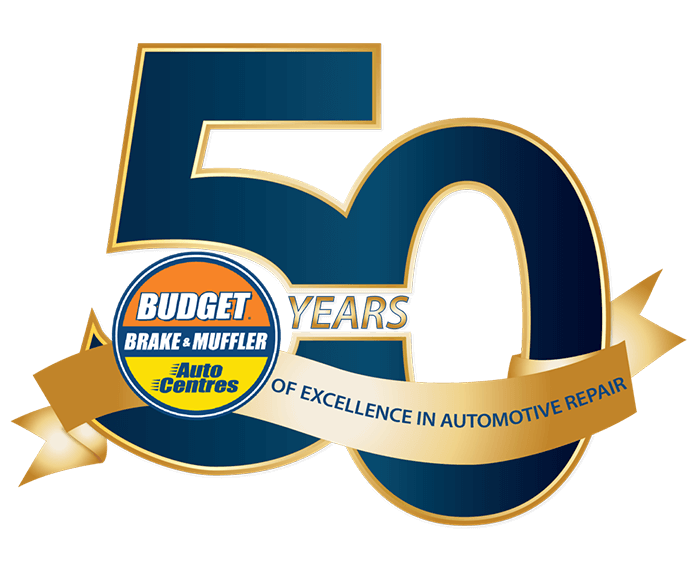 Celebrating 50 Years of helpful, friendly and reliable service – Budget Brake & Muffler Auto Centres are always there when you need us.

Our technicians not only know the communities we serve, but they also get to know you and your auto repair needs. They earn your trust with exceptional, affordable service the first time, every time.

That’s our promise to you.

Looking for a rewarding career in car care and repair with a progressive employer?

Find The Budget Auto Centre Near You!